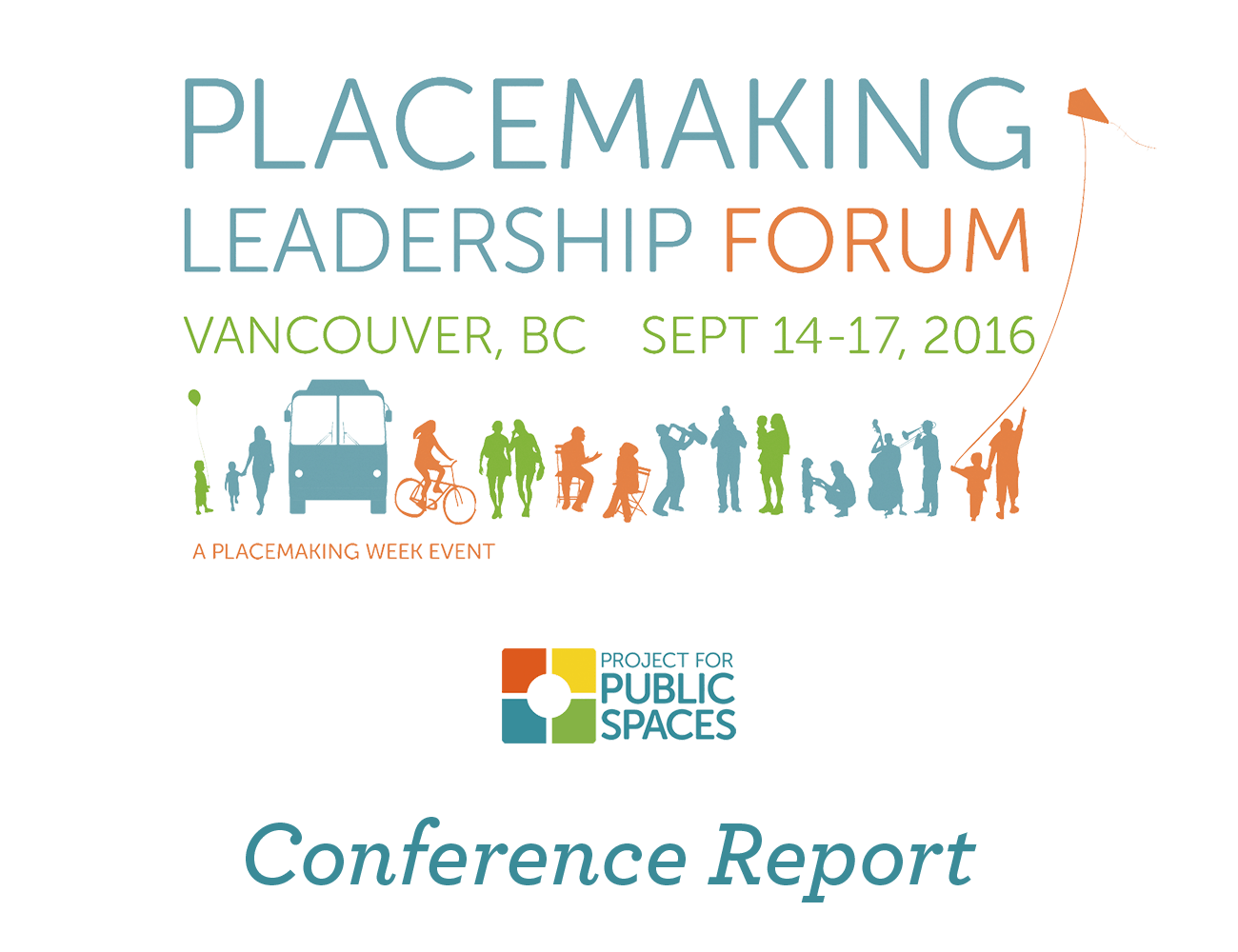 “So, what happens when you bring together urban thinkers from around the world? You get a passionate converging of ideas, geeking-out over bike lanes, an opportunity to share common challenges and forge new pathways forward for shaping resilient cities. … This was a conference for problem-solvers, governments, community advocates, local business leaders, property developers and nonprofits who are walking the walk.”

“I met many different people who approach placemaking in many different ways. Some were architects, some activists, some consultants, some non-profit arts organizations. All were committed to creating great spaces for the community.”

“I attended almost 20 sessions over four days at this conference and could write five articles about each one—from Placemaking and economic development to Placemaking and health.”

“Through these kinds of conferences, we can connect people to share their knowledge, and we will see more and more innovation in the coming years.”

“When the dust finally settles on September, there’s no doubt it will be seen as a seminal month for city building in Vancouver.”

“Digital placemaking is a process that can either increase inclusion in placemaking, or push people away from places to which they no longer feel connection. We hope these open-ended conversations around the evolution of placemaking will continue.”

"One of the souvenirs left over from Placemaking Week: a big, shockingly pink, activated laneway. No longer a space for dumping and picking up garbage, the laneway that runs behind West Hastings Street between Seymour and Granville is now a true people place with basketball hoops, furniture, unique lighting and vibrant colours.”

“As public events practitioners, it is an invaluable experience to be around and participate in the discussion with so many different professionals with multiple perspectives. Great to see that the vision of promoting inviting public space experiences as a powerful tool for civic engagement and change of perception.”

The Placemaking Leadership Forum took place on September 14–17th as part of Placemaking Week 2016 at the Sheraton Wall Centre in Vancouver, Canada, where rare and glorious weather set the scene for an informative and energetic week.

Over 500 attendees and speakers from all over the world piled into Downtown Vancouver for a series of tours, workshops, talks and side events, aimed at envisioning a place-led future for cities by leveraging the convergence of a range of global issues—from health and sustainability, to innovation and equity—in public space.

The Placemaking Leadership Forum built upon the work of PPS’s Placemaking Leadership Council and the international Future of Places conference series, and shared the stage with PPS partner Pro Walk / Pro Bike / Pro Place as part of the first ever Placemaking Week. Altogether, over 1,500 people joined us for this week-long groundbreaking gathering of placemakers, policymakers, and other allied professionals. 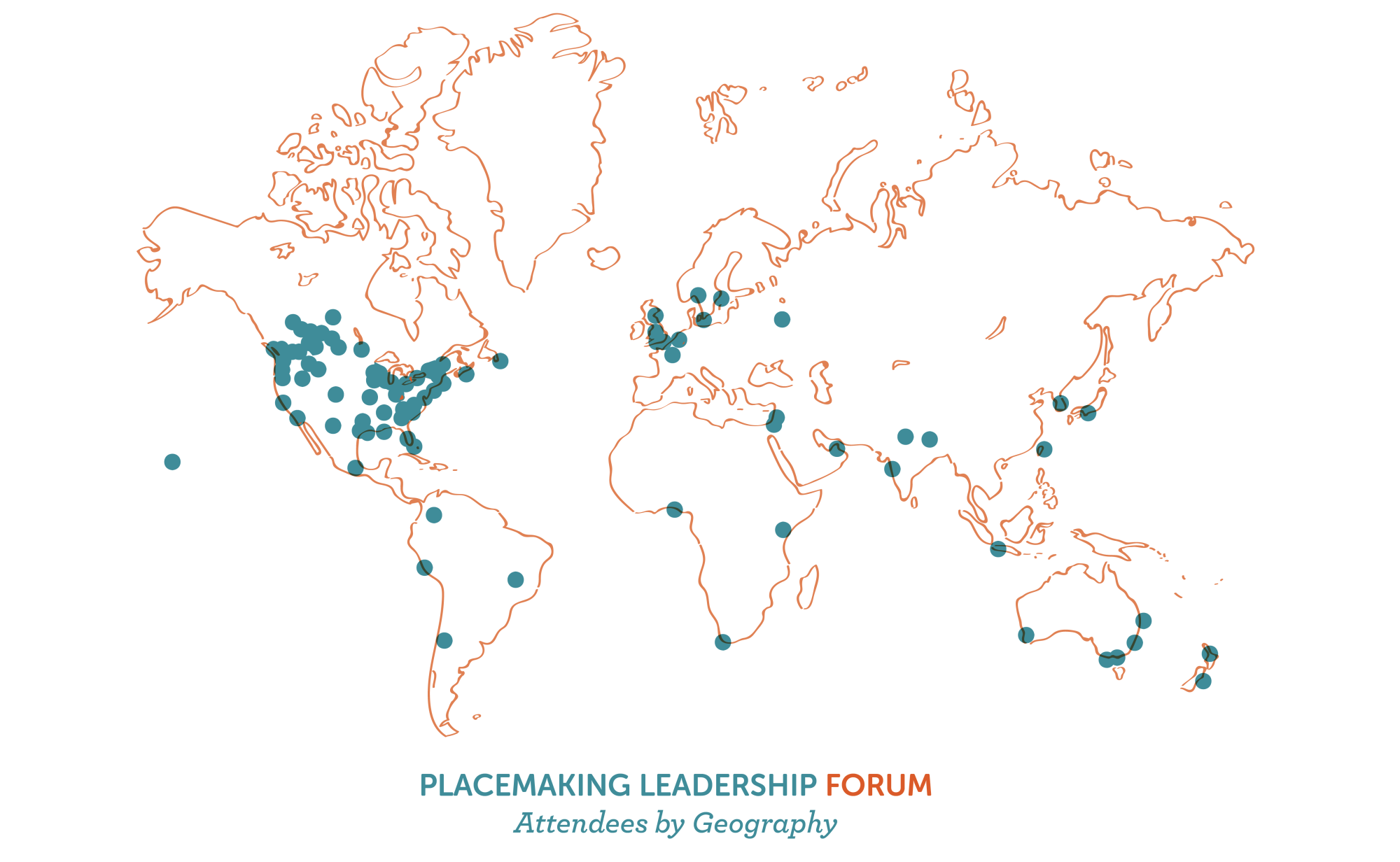 Wednesday’s pre-conference events kicked off with several tours around Vancouver: a psycho-physiological walk led by Happy Streets Living Labs; a walking conversation about the potential redevelopment of the region’s waterfront transit hub and what one tour leader called “the most privileged surface parking lot in the world”;  and a retrospective of Vancouver’s massive eastern False Creek redevelopment. Back at the hotel, early-arriving attendees had the option to attend one of four practitioner short talks on the common themes of Measuring Impact, Lighter Quicker Cheaper, Community Engagement, and Managing Change, followed by two panel discussions focused in on vital topics of our times: equity and digital technology.

The day ended with a showstopping networking party organized by Pro Walk / Pro Bike / Pro Place at The Pipe Shop in Shipbuilders Yard, North Vancouver—a large heritage waterfront building with an indoor/outdoor concept plan. Attendees were whisked away by Sea Bus to the venue across Vancouver Harbor, where partygoers found their way to the event by creative wayfinding (pictured below). The space was activated with music, games, interactive photography, a range of local food trucks, a bar, and a beautiful sunset. 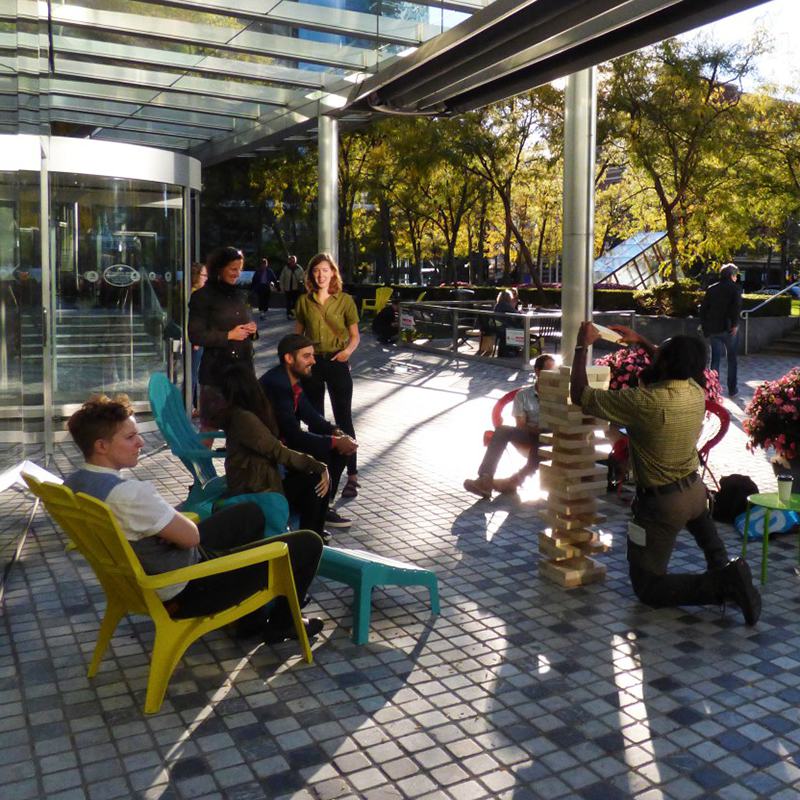 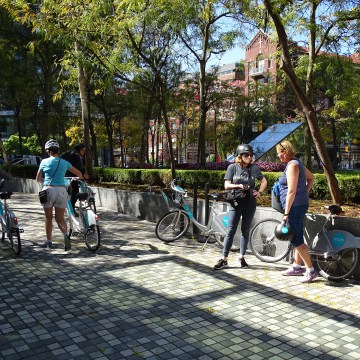 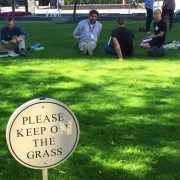 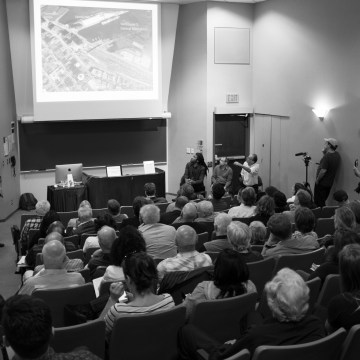 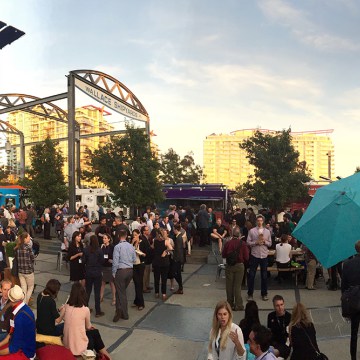 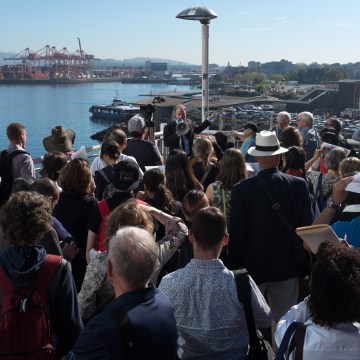 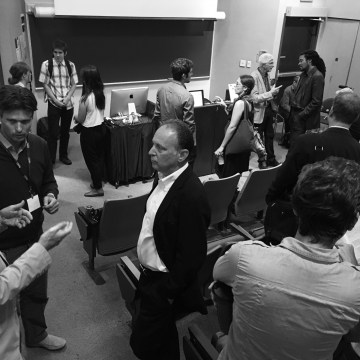 Thursday welcomed a full list of attendees for the Future of Places Summit, the culmination of the Future of Places conference series, which successfully secured the inclusion of goals related to public space in UN-Habitat’s New Urban Agenda. The event opened with a video welcome from Joan Clos, Executive Director of UN-Habitat and recent recipient of the Jane Jacobs Medal. Plenary presentations showcased cutting-edge research from leading students of public space. Some sessions focused on the dysfunction and inequality of the old urban paradigm and the systems that keep this model in place, while others explored the possibilities of a new urban paradigm that captures the value created in the process of urbanization for more humane, equitable and sustainable ends.

After a morning of plenaries, attendees broke out into seven Research Breakout Sessions focused on the following themes: Citywide Approach, Human Scale, Sustainable Spaces, Adequate Public Spaces for All, Culture and Context, People-Centered Approach and Economic Spillover. Each session brought together an interdisciplinary group of researchers, selected through an open call process, to present their own work and discuss these broad topics. Representatives reported out from these breakouts to the plenary audience (stay tuned for a summary blog post soon).

Thursday ended with a choose-your-own-adventure party (passport included!) exploring downtown Vancouver public space, appropriately called a Power of Placemaking (POP) Crawl. This event included the official launch of Downtown Vancouver’s BIA’s pilot project that activated a laneway, a celebration of the 10th anniversary of the Vancouver Public Space Network, as well as a range of other curated sites around the area. It really was a perfect way to end a day of discussing putting research into action!

Aside from the events that PPS had arranged for Placemaking Week, we helped attendees organize their own side events. One group arranged a history and heritage in placemaking meeting, while a number of other groups set up regional meetings, including North American West Coast, Asia-Pacific, New England, and South America, as well as a large gathering of Canadian Placemakers on the Saturday following the conference. 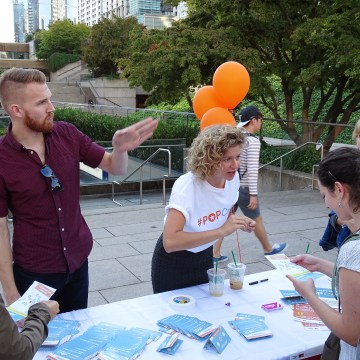 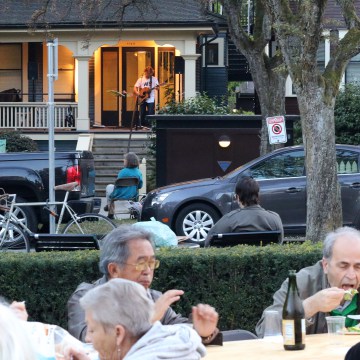 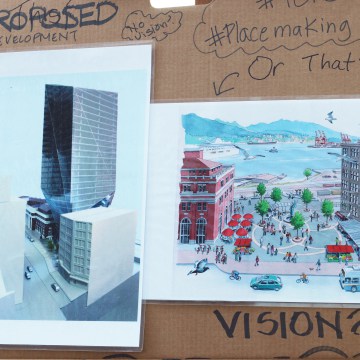 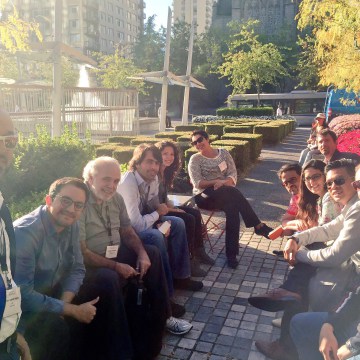 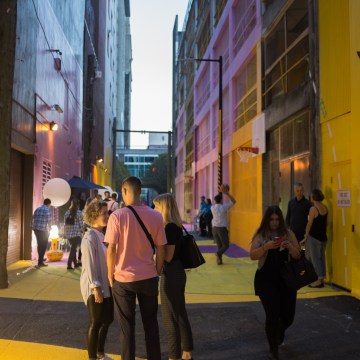 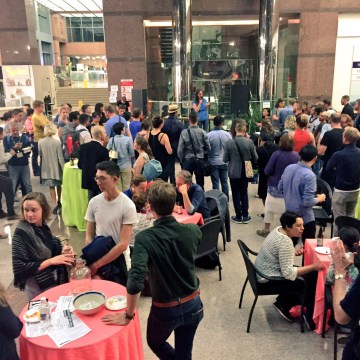 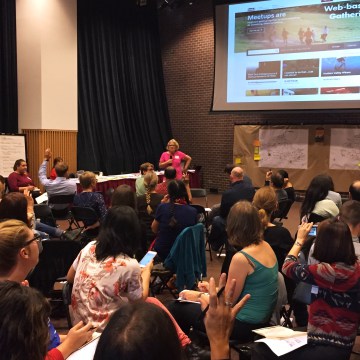 Friday was a full day dedicated to ten “transformative agendas” where placemakers can have their greatest impact: Equity and Inclusion, Architecture of Place, Healthy Places, Streets as Places, Rural Placemaking, Innovation, Place Governance, Creative Placemaking, and Resilience. Based on the needs identified by members of our Organizing Brain Trust, some themes were addressed through plenaries, while others were addressed through breakout sessions.

The plenaries of the day tackled some of the most complex, systemic issues in placemaking with an emphasis on real examples that address them in practice. The opening panel featured new approaches to community engagement, both online and offline, in and out of government. The afternoon featured a series of micro-presentations about putting equitable values into action, and an interdisciplinary panel about how architects, planners, developers and researchers can come together to build better places.

Attendees each participated in two of six breakout sessions as well. Exploring Place Governance, Transportation and Streets as Places, Arts-Based Placemaking, Innovation and Entrepreneurship, Healthy Communities, and Rural Placemaking, these sessions followed a variety of formats, from presentations and discussions to in-depth working strategy meetings. After a flurry of flipcharts and post-it notes, representatives from each breakout reported back again to the entire group, which was live-scribed for posterity (a summary blog post will be available soon). Across many of the sessions, attendees called for more metrics, more shared resources like case studies and best practices, and more coordination of efforts across communities of place and practice—all aspirations we hope to work together to achieve in the coming months. 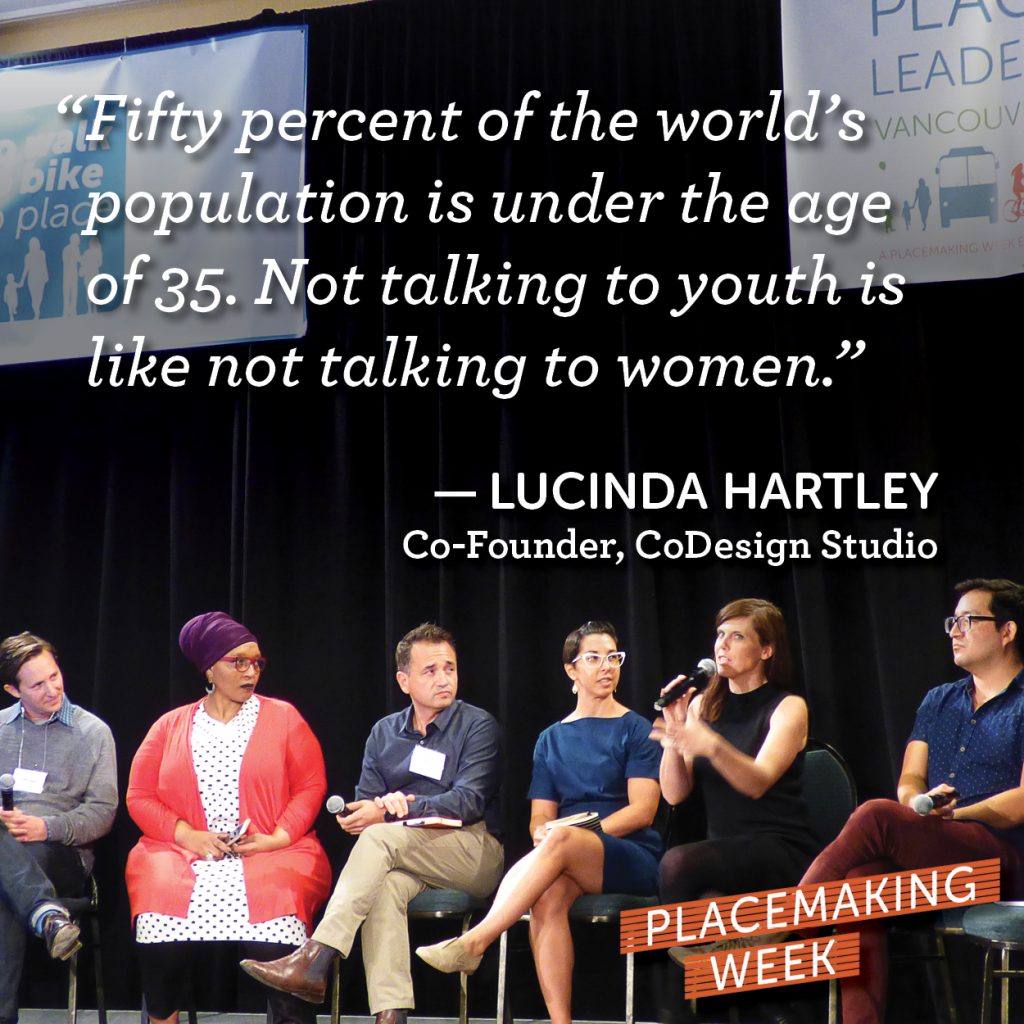 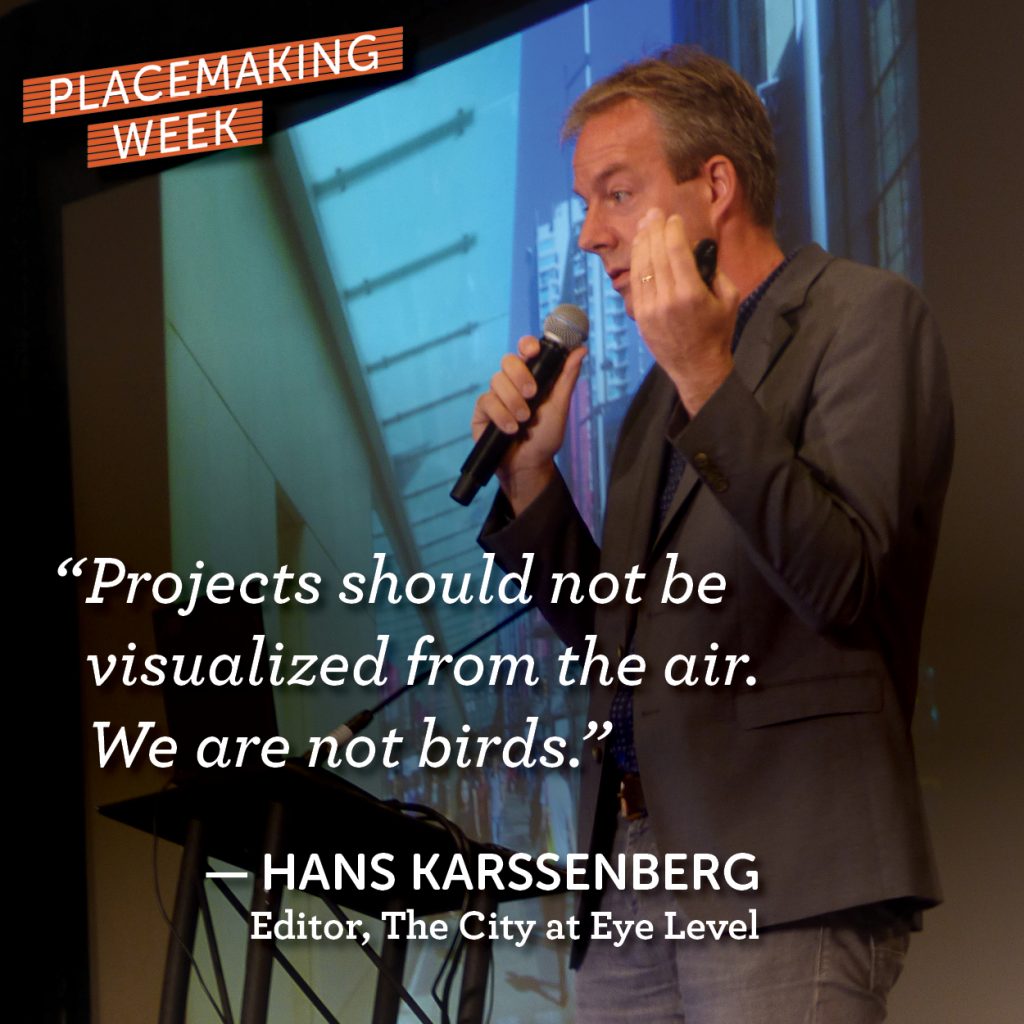 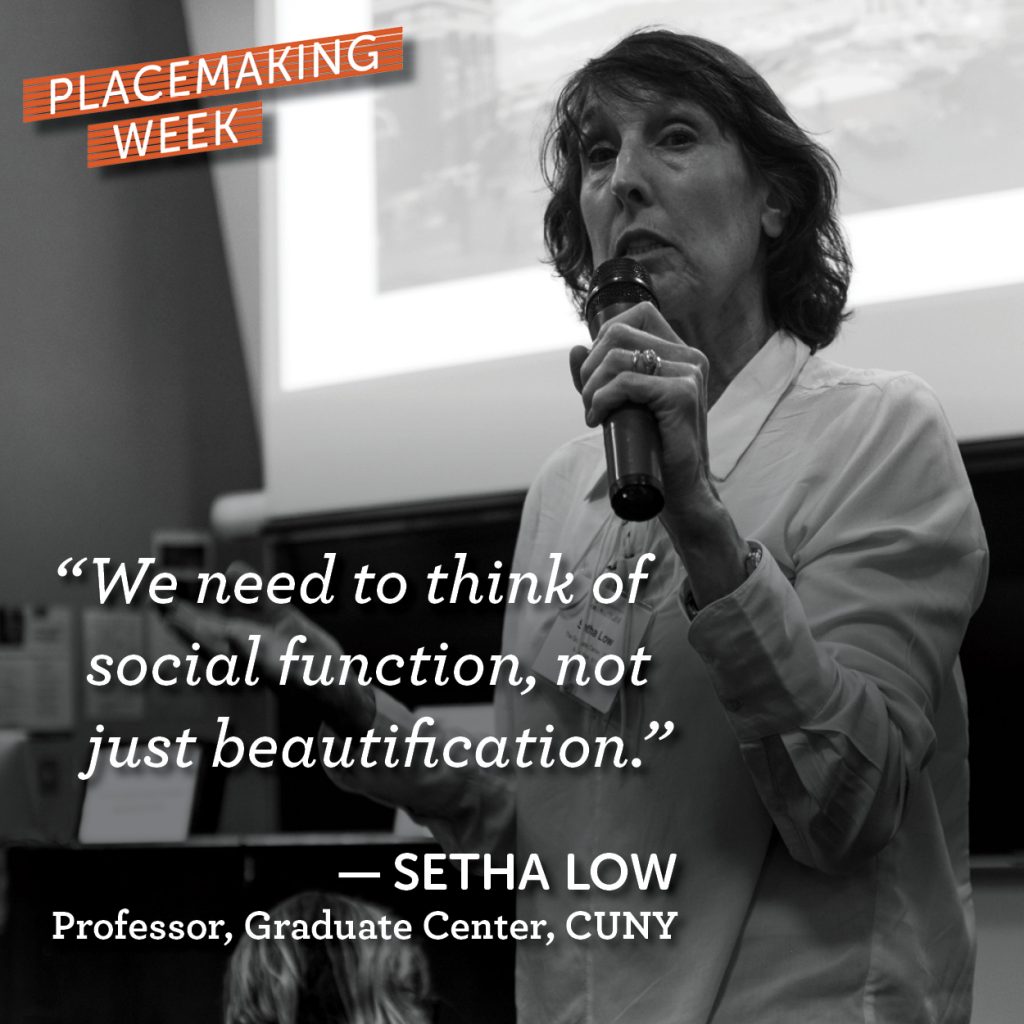 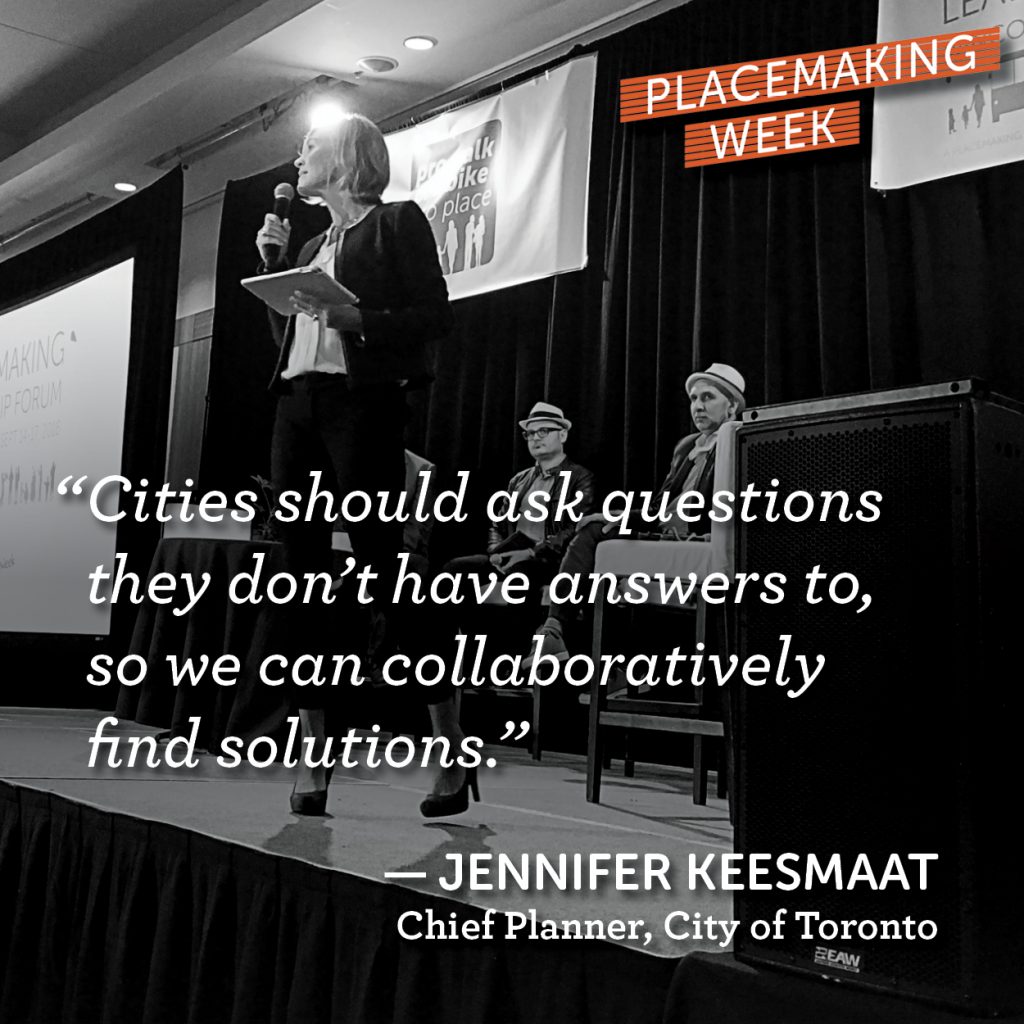 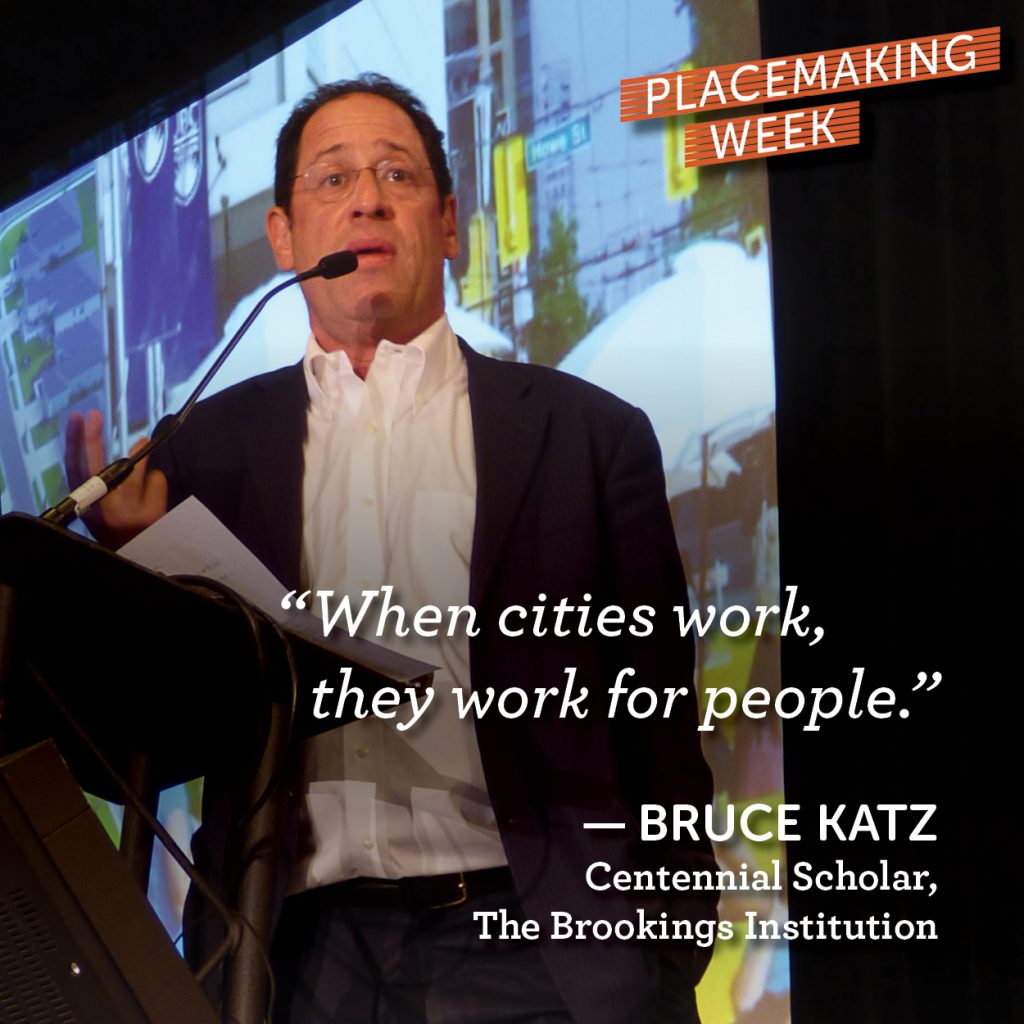 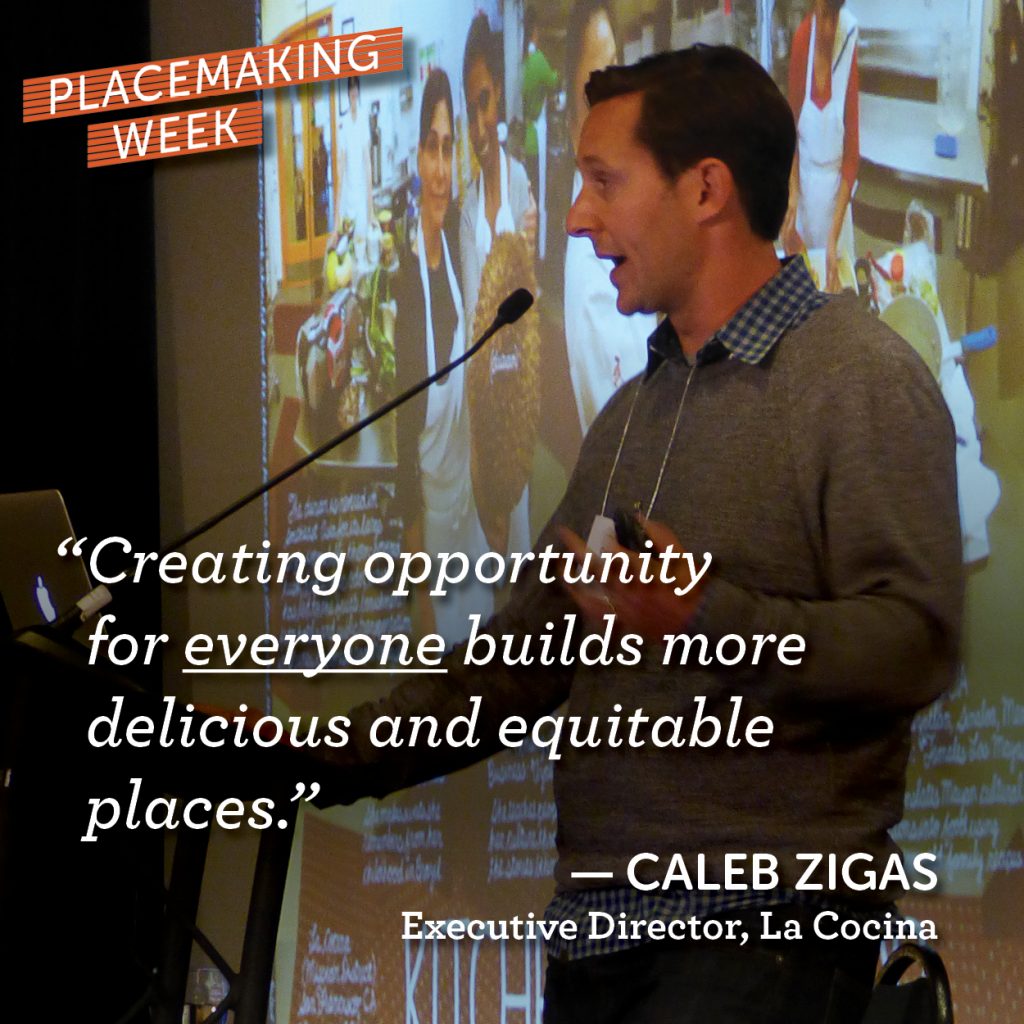 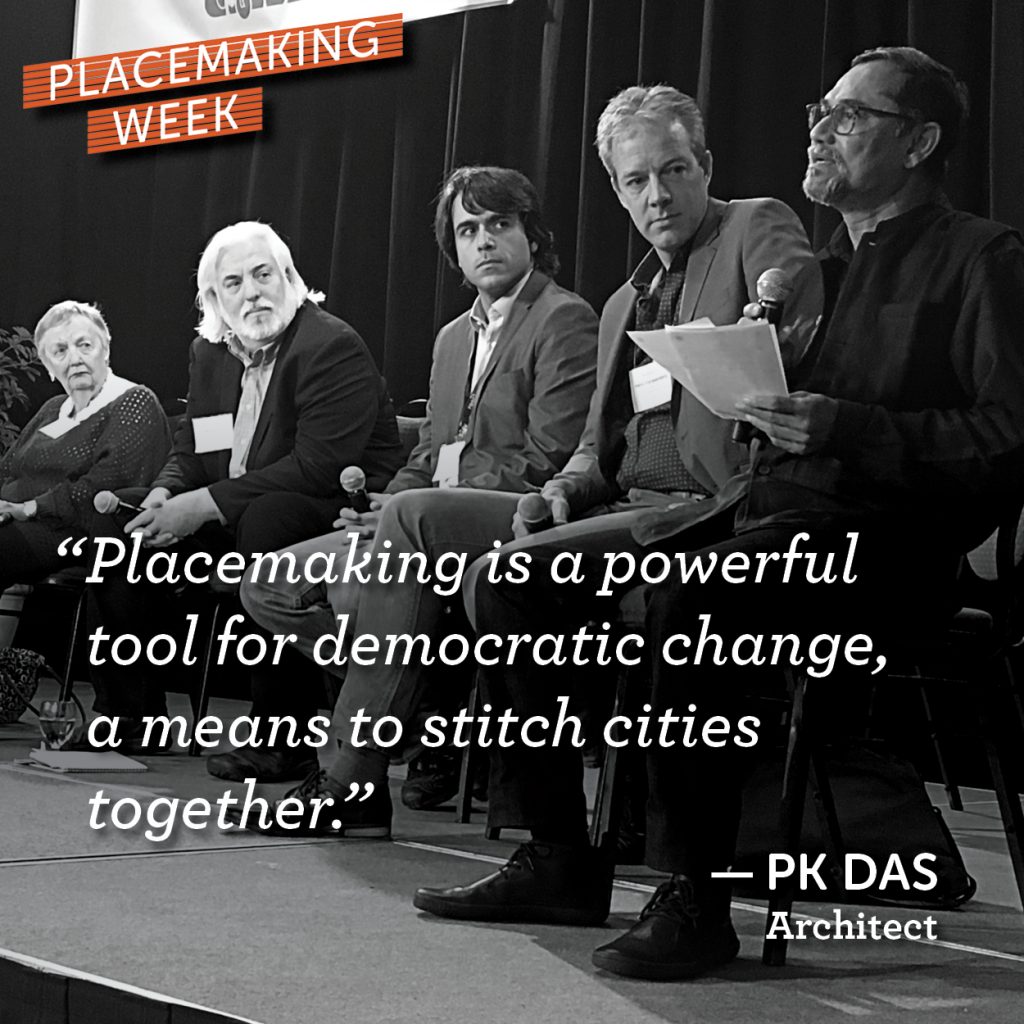 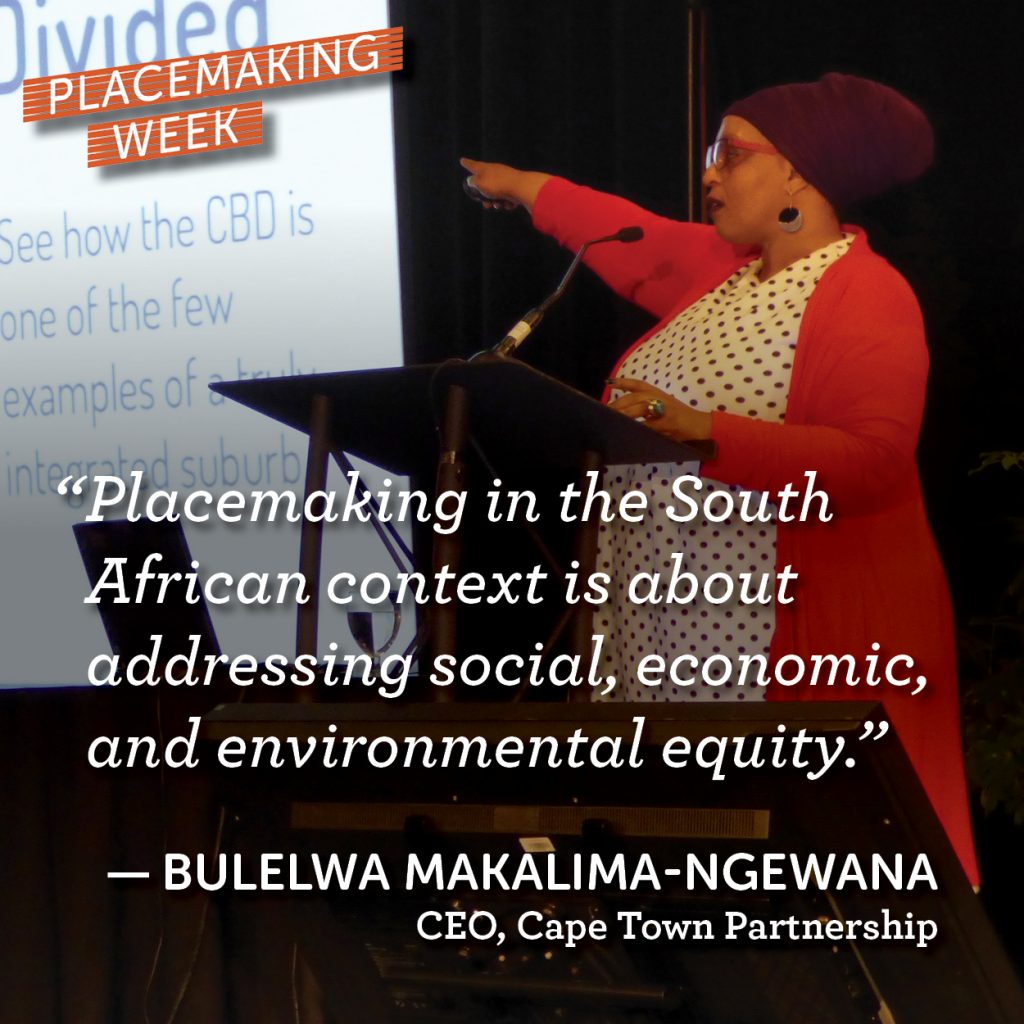 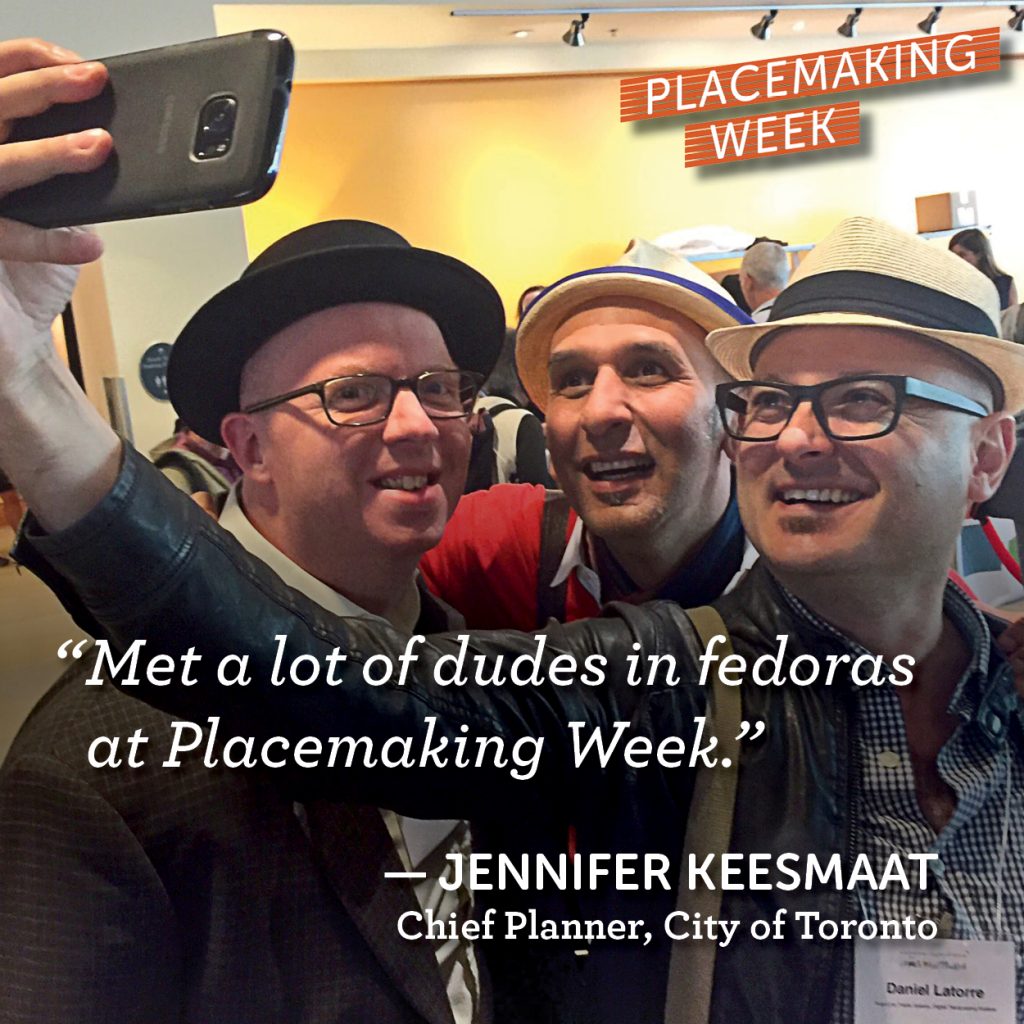 The conference closed with a panel discussion about the upcoming Habitat III conference in Quito, Ecuador which will finalize a “New Urban Agenda” to guide global urban development over the next two decades. Is the document comprehensive enough, fair enough? Who will implement it and when and how? But amidst the excitement, some panelists reminded us that the New Urban Agenda is not the cutting edge of urban problem-solving. In fact, it is playing catch-up with the shared values of many communities and the placemakers that help make their visions a reality.

The concerns of the New Urban Agenda about health, sustainability, equity and economic development have long been hallmarks of the placemaking movement, and Placemaking Week provided an exciting opportunity to hear about how practitioners are working to realize these ideals on the ground. Later this month, after the Agenda is enacted, officials will fret about how best to implement these new common goals. Luckily for us all, implementation has already begun—if politicians and policymakers have the courage to listen to what is currently happening at the grassroots in the places they govern.

Appropriately enough, Vancouver was home to Habitat I in 1976, the first iteration of the UN’s twenty-year sustainable development conference. And what a great host it was again! We can see why Vancouver is consistently rated the most livable city in North America. Thank you for setting the bar high for Placemaking convenings to come.

Learn more about what happened at the conference: conference website, schedule & speakers, and videos.

Email info@placemakingweek.org to inquire about a specific presentation. 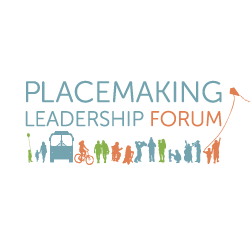 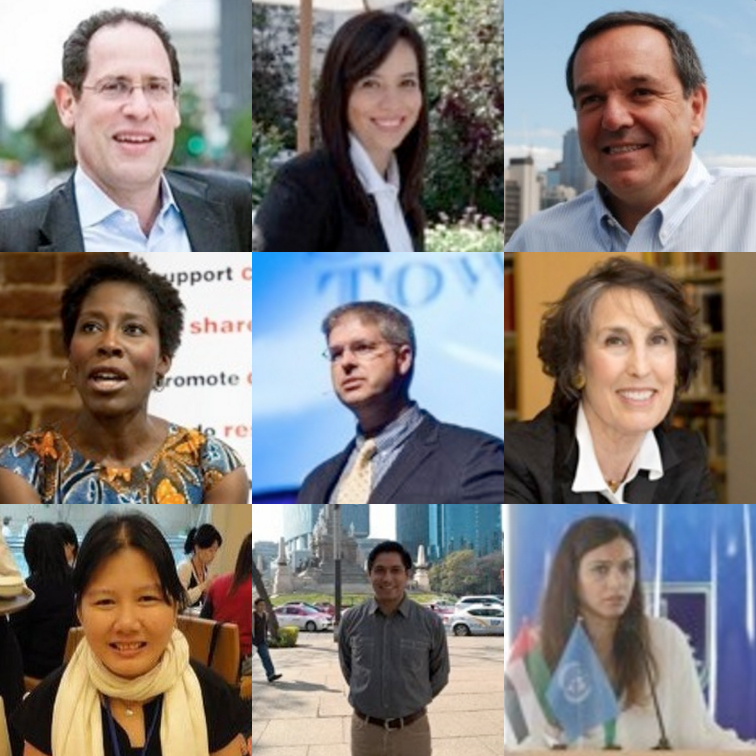 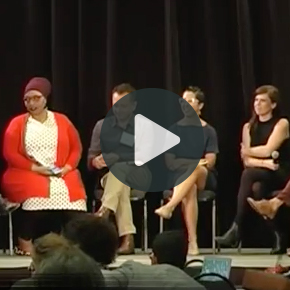